Most of my American friends know that there is something off about my Christmas. Indeed, it is two weeks after regular Christmas, only because Serbian church decided not to follow the new, Gregorian, calendar. The same applies for Russian church and few others Christian Orthodox churches.

It is not easy to celebrate two-week-later Christmas, especially on a workday. Plus, in January, people are usually tired of holidays, holiday fever is practically over. People crave peace and detox diet. But, for Serbs in the U.S. holiday season is not over with New Year Eve's, we are waiting for our Christmas that comes on January 7th. It is nice that it is not about presents, but rich and festive food. And, the leading role on the Christmas feast is taken by whole roasted pig, to be more precise, roasted suckling pig. Serbs prefer young pig, because it has tender and leaner meat.

Until recently I didn't appreciate roast pig thing, it looked a little bit barbarian to me and it is far away from healthy Mediterranean diet that is my favorite. But one day I realized how cool roast pig is, how special role it had and still has in human diet. For a big part of human population that is the most festive food, many important events such as Christmas, weddings, graduations, family gatherings and so on, include roast pig. It must be a very special food I reckon, long human history proved it. And, to be honest, there is too much hype over "clean food", you just wish to go against the popular eating trends. I mean you can still have healthy diet but on holidays just relax and enjoy heavy and delicious food.

I will tell you what is my favorite part on roast pig - crispy skin and the first layer of buttery meat that is just next to the skin, if I am lucky enough not to have fatty layer instead. And, the meat must be warm, but I know many people who prefer cold pork. 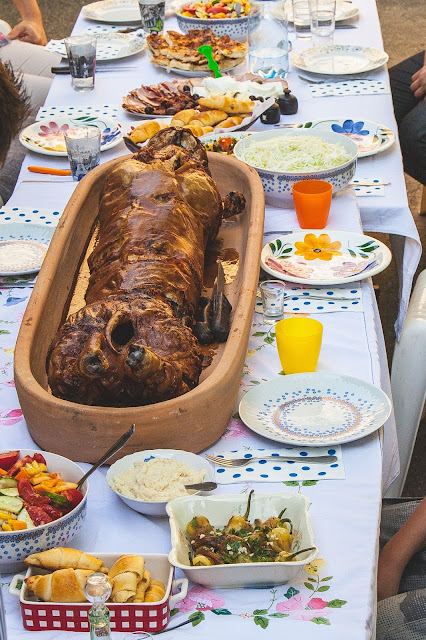 Honestly, I thought for many years that only Serbs are attracted to pig roasting, but I discovered that in many other parts of the world this specialty is highly prized too.

In Serbia, the most common way of preparing roast pig is on a spit. Hot coal and grape leaves are traditionally used for roasting, it is placed over shallow dig or over concrete surface. It is not recommended to roast pig over open flame, it is going to burn and ruin meat. Before piglet goes to fire, it is skinned and cleaned of organs and it is put on a long stick. Pig should be rubbed with salt before cooking, at the end people sprinkle the piglet with beer because it adds nice flavor. Piglet is usually very young, it weights about 40 pounds, and it takes about 3 hours to be done.


I forgot to mention that there is always  a boy who will volunteer to flip the piglet by turning the stick, and it can take for hours. As you can see this is rather time consuming and physically demanding method, so today in Serbia people usually order roast pig in specialized roasting houses with motorized rotisseries. Plus, it is not easy to make good spit roast pig, you need high-quality professionals to do the job. In the same way they roast lamb, that is also very popular in Serbia.

When it's done, roasted piglet is cut into small pieces and served on plates with cabbage salad, Russian salad and horseradish sauce ("ren").


Last year I was fortunate to try roast pig on a couple of occasions. In Serbia I ordered it for my daughter's christening, and it was a huge hit among kids and grown-ups on the party. In Italy I had an opportunity to try famous Porchetta, whole roasted boneless pig. It is a street food, you can buy slice of porchetta on panini. I had it even in the U.S. two times, once on a summer party and recently on New Year Eve's party. I didn't know that there is a Chinese restaurant in Baltimore county that roasts whole pigs of different sizes as a carry out.

I want to end this story on roast pig with the wisdom - hyped food comes and goes, but only the real stuff inspires people through the centuries. 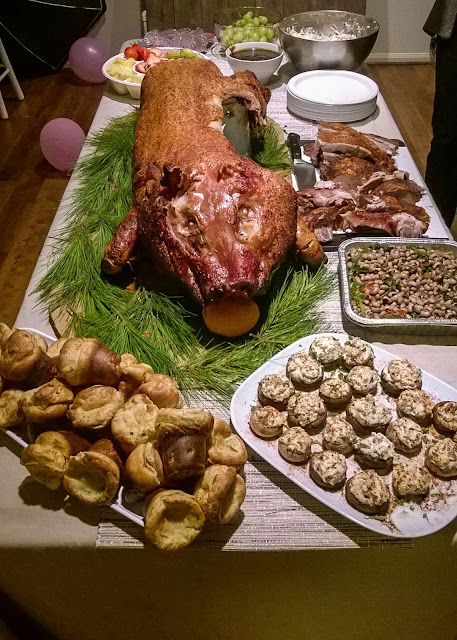