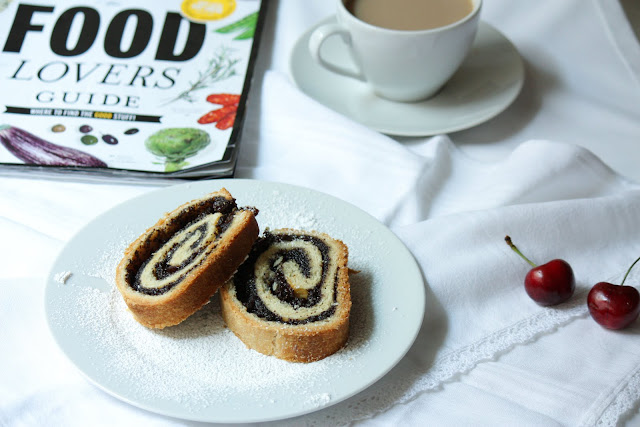 My husband loves poppy seed strudel. Since we moved to America he has been craving it. But how can one make poppy seed strudel here where it is not possible to find ground poppy seed, and even if you do it is as expensive as gold.

However, one day, not long ago, we found “Solo” canned poppy seed for cake and pastry.
It is really good and not expensive. And finally I made poppy seed strudel, although I had never made it before.

It turned out very nice... the crust was buttery, not too soft nor hard, poppy seed filling was good, raisins combined with poppy seed gives some zest... But that was not enough for my husband who has just said it was not the real poppy seed strudel, because it didn’t resemble his grandmother’s, who was by the way famous for her pies and strudels... He said the dough was not soft enough, and the crust wasn’t dark brown enough as it should have been.

So if you have an idea about how to make poppy seed strudel like my husband’s grandmother please let me know. The recipe of his grandmother was not preserved, and I doubt that it has ever existed. I am very pleased with the recipe below, but there, my husband is not... 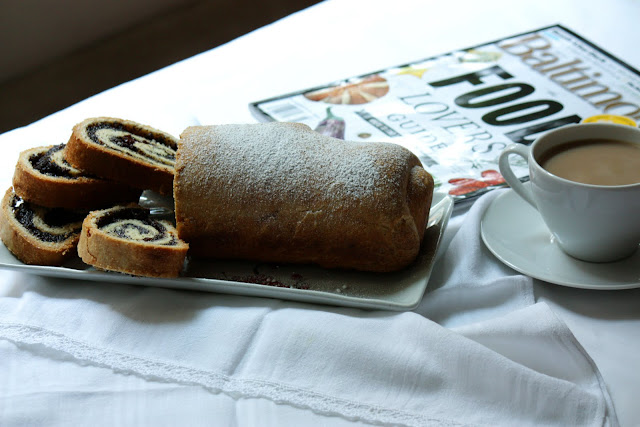 My cousin makes poppy seed strudel for a living and I was thinking to ask her for the recipe... I mean it must be very good when she supports herself making and selling them. She found that niche in the strudel market and she is doing really fine. Interesting idea for business. However, I think her recipe is best kept secret so I gave up asking.

I did not know that poppy seed strudel is so popular almost everywhere. Germans consider it their national dessert and call it Mohnstrudel. 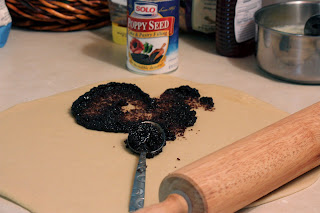 Melt butter.
Sift the flour and add to it the yeast, salt, heated milk, melted butter and eggs.
Knead dough for about 10 minutes until soft and smooth.
Allow the dough to rise for about 1.5 to 2 hours.
Preheat the oven to 180C (355F). Prepare a baking pan and spray it with oil.
Stretch the dough by rolling pin. The dimensions depend on the pan where you will bake strudel.
Fill the dough with poppy seed. One can for one strudel.
Add raisins.
Wrap the dough and put it in a pan where it should rest for about 30 minutes. Brush crust with remaining melted butter. Then put the strudel to bake for about 40 minutes.
Finally, when the strudel cools down sprinkle with powdered sugar. 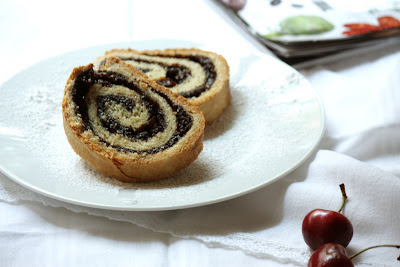